The Pacific Northwest transmission grid is a part of the Western Interconnection, one of three major National Energy Regulatory Commission (NERC) grid interconnections in the continental United States, encompassing all or parts of the states and provinces west of the Rocky Mountains to the Pacific Ocean. The other two interconnections are the Eastern Interconnect which covers states and provinces east of the Rocky Mountains to the Atlantic Ocean and the Electric Reliability Council of Texas (ERCOT) Interconnection which covers most of Texas. The transmission system is composed of major alternating current (AC) and direct current (DC) high voltage lines, distribution lines, substations, transformers, source generators, and delivery points or load centers.

A major component of our transmission system is it’s connection to the rest of the Western Interconnection, allowing for the transition of energy (exports and imports) with the California and British Columbia interties for additional flexibility, adequacy of the resource supply, and economic purposes. According to WECC, the Western Interconnection is comprised of roughly 136,000 miles of transmission lines. The system was strategically developed to connect the major load centers with typically remote resources, and in particular in the Pacific Northwest, to connect the hydropower dams to high-voltage transmission lines in order to support the transfer capability of seasonal energy.

Source: WECC, State of the Interconnection

While the Pacific Northwest does not have a single regional transmission operator (RTO) or independent system operator (ISO), there are balancing authorities (BA) that ensure the dispatch of generation to the electricity grid meets energy demand (load) at any given time. Balancing authorities work independently to balance the needs within their designated footprint, but there are coordinated agreements among BAs to collaborate on reserve sharing and transmission maintenance and expansion activities. NorthernGrid is a transmission planning organization (formerly two separate organizations that joined together – Columbia Grid and Northern Tier Transmission Group) that facilitates regional transmission planning across the region and Intermountain West.

In general terms, the Pacific Northwest power system operates within a bilateral (decentralized) transmission market in which the developer or owner of a generating resource must typically secure or hold the rights to a long-term firm transmission contract in order to proceed with constructing and selling the output of the resource. A bilateral contract can create price stability for both the buyer and the seller. A long-term firm contract is essentially a reservation for transmission capacity between specific points, for all hours of the day. While there are some conditional firm capacity contracts, they are limited and only available on a short-term basis. A conditional firm contract allows a resource to access the grid, but the operator reserves the right to curtail the reservation under specified conditions in favor of long-term firm contracts.

Long-term firm contracts are maintained regardless of whether or not the capacity is physically utilized (i.e. whether or not there is generation at a given hour), however FERC Order 889 requires that all unused transmission capacity must be marketed on the Open Access Same-Time Information System (OASIS) for short-term duration use. This can have limited value to developers who may need a firm transmission deliverability guarantee in order to secure financing and begin construction.

The Bonneville Power Administration owns the majority of the transmission system in the Pacific Northwest, although there are some utility and energy service supplier owners as well. There is currently limited available transmission capacity (ATC) within the Pacific Northwest grid, as much of the capacity is tied up in long-term firm contracts. To secure transmission, resources in the region must proceed through an interconnection request as well as a parallel transmission service request with a specific point of receipt (POR) and point of delivery (POD). As major projects retire, additional capacity may open up on certain paths and transmission rights could be resold or developed by the owners.

When Bonneville receives transmission service requests to bring generation online from a certain point on the system, they enter a Transmission Service Request and Expansion Process (TSEP) queue and are analyzed as “clusters” where projects in similar areas are grouped together. One issue Bonneville and any transmission provider in a bilateral market faces is that through the OATT process, they cannot make a judgement call on which project requesting transmission service will move forward out of the group. Rather, they either process the requests serially under the assumption that requests earlier in the queue will actually come online (this is not always the case) or when analyzing a cluster study they assume that all of the requests come online together. This can be problematic for a number of reasons. As an illustrative (and oversimplified) example, thousands of megawatts of capacity (across many projects) enter the queue in response to one request for proposals (RFP) for 100 megawatts capacity where there is currently 99 megawatts of available transfer capacity (ATC). These projects are studied in aggregation (thousands of megawatts vs. 100 megawatts of need identified in the RFP) as if they are all going to be built, rather than one winning bid. This can result in a study showing the need for significant system upgrades to meet the thousands of megawatts in the queue, rather than the 1 megawatt needed (in addition to the 99 megawatts ATC) to meet the RFP. Thus, the result is that the transmission offer is not made to any of the projects in the queue.

Project developers can also experience significant delays to project construction due to long transmission request queues. If developers were able to build (and secure funding) under the assumption that they could purchase the unused short-term physical capacity tied up in long-term firm contracts through OASIS, more projects could be developed and the transmission grid could be better utilized. This is currently not a reality for many project developers who require firm transmission guarantees in order to proceed. Transmission system expansion and upgrades are long-term projects that can be very expensive and intensive to complete.

With limited commercial inventory of long-term firm transmission, the Council performed an analysis to understand the current utilization of the existing transmission system. Council staff analyzed Bonneville OASIS data of key transmission paths to determine physical utilization throughout an average day each month compared to the capacity. The analysis concluded that it is entirely possible – and common – that a given transmission path could be fully contractually encumbered on a long-term firm basis, while still having substantial available physical capacity most or all hours of the year. In short, contractual encumberment is a commercial issue, not a physical capacity issue.

In the example below, the capacity and utilization of the West of the Cascades North transmission path is shown for the year 2017. This is a winter peaking path that primarily serves Northwest Washington. The total transfer capability of the line is 10,250 megawatts and the available long-term firm inventory (as of the time of this analysis, March 2019) is very limited with just a couple hundreds of megawatts available over the next decade or so. In this figure, each color represents a different month of the year in 2017, with the colored shape showing how flows looked on an average day in that month (the average is calculated by looking at the average of each hour - hour 1, hour 2, etc. - and using those average hours to create an average day). The colored lines above the shapes represent the typical system operating limit (which is sometimes greater than the total transfer capability due to contracts and conditions) and reflects what the transmission line could have typically allowed during an average day (takes into account outages and seasonal derates). The gap (white space) between the colored area and the colored line represents the unused physical capacity on this path. 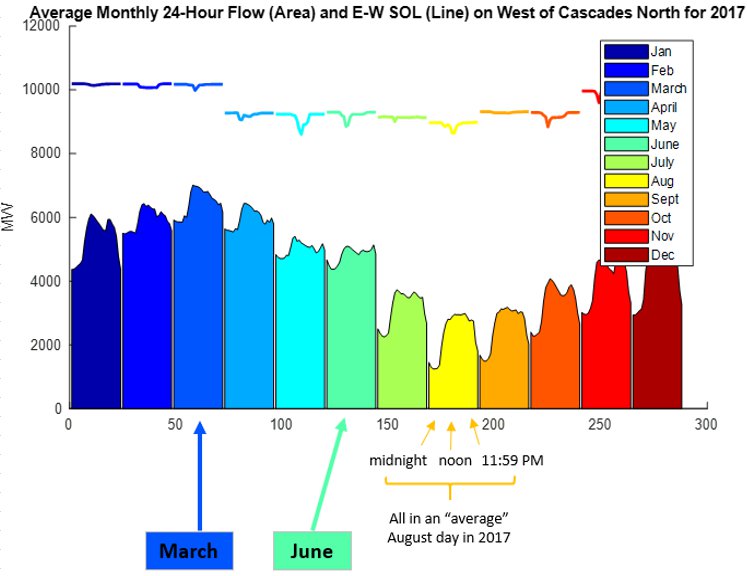 In power planning, a presumption that resources can only be built where there is available long-term firm contract capacity can lead to substantially increased costs through expansions and upgrades to the existing transmission infrastructure and excessively limiting resource potential based on the absence of available firm transmission. This can lead to the potential of excluding least-cost resource development and/or recommending unnecessary transmission expansion by only including resources paired with long-term firm contract availability. On the other hand, a presumption that resources can be built wherever there is physical capacity can overstate resource potential and operational transmission capability.

Should a planning model assume that a variable resource could be built to use the physical capacity whenever it is available for short-term purchase? Further, is this actually realistic for developers to finance? In addition, if some of the long-term firm transmission capacity already sold is held by variable resources, is there a way to recognize that a capacity resource could still potentially be deliverable for resource adequacy by assuming that if the renewable resource is not generating, the transmission will be available for the capacity resource? Where does the balance lie within the confines of the current transmission infrastructure, and what steps can be taken to maintain a least-cost, reliable and adequate power system now and in the future?

To understand how the Council used this analysis to develop the regional potential of its generating resource reference plants, see the Resource Maximum Buildout Assumptions.