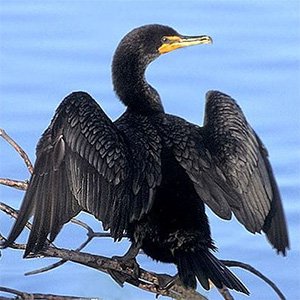 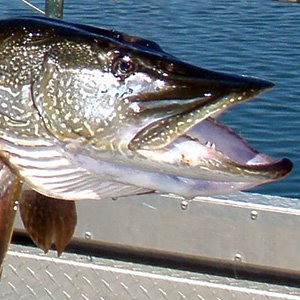 A gauntlet of predators face Columbia River salmon and steelhead, both adult and juvenile fish. The Council through its Columbia River Basin Fish and Wildlife Program with its state, federal, and tribal partners, works to reduce the impacts, but it is a daunting challenge.

For adult fish, the focus is on predation by marine mammals – seals and sea lions. For juvenile fish, the focus on the voracious northern pikeminnow and fish-eating birds, primarily Caspian terns and double-crested cormorants.

Marine mammals – harbor seals and two kinds of sea lions, California and Steller – prey on adult fish as they enter the river from the ocean to spawn in habitat and hatcheries upriver. The heaviest predation occurs in the spring, when sea lions, mostly males, enter the river to gorge on fish before heading to breeding grounds off southern California in June. While many sea lions leave the river at that time, many others have become permanent residents of the Columbia River estuary, hauling out on boat docks in Astoria and on shorelines upriver and downriver from the city. Many also follow the salmon all the way to Bonneville Dam, a distance of more than 140 miles. The number of sea lions in the lower Columbia River is increasing every year, and so is predation.

Meanwhile, predators on juvenile salmon and steelhead include both birds and fish. Scientists estimate that fish-eating birds consume 35 percent of the juvenile Upper Columbia River spring Chinook salmon, an endangered species, as they migrate downriver to the Pacific Ocean each spring. Caspian terns, double-crested cormorants, and California gulls pick off the juvenile fish as they migrate downriver.

Northern pikeminnow also prey on juvenile salmon and steelhead in the reservoirs behind Columbia and Snake river dams. They eat millions of smolts every year in the river system. With funding provided by the Bonneville Power Administration, the Pacific States Marine Fisheries Commission administers an annual sport reward fishery for pikeminnow between May 1st and September 30th. Anglers are paid for each fish longer than nine inches. The goal is to reduce the average size of pikeminnows in the rivers, not eliminate them. Larger, older fish eat more smolts.

The Council’s Columbia River Basin Fish and Wildlife Program recognizes that the construction and operation of the Columbia-Snake river hydrosystem and the disposal of dredge spoils in the lower Columbia River and estuary have altered historical habitats and created new, hybrid habitats. These altered habitats support a wide range of predator species including native and non-native predatory fish species, such as pikeminnow, and predator birds including terns, cormorants, gulls, mergansers, and pelicans, and also marine mammals.

The program also recognizes that while predation is a natural, dynamic and complex process within the Columbia River Basin ecosystem, predator-management actions, guided by best available scientific knowledge, are necessary to manage the level of predation on, and improve the survival of, salmon and steelhead, sturgeon, lamprey, and other native resident fish species in the basin.

The Council tracks predation research and management (under development, choose Predator Management from the dropdown menu) as part of its reporting on high-level indicators, which track the progress of the Council's fish and wildlife program to mitigate the impacts of hydropower on fish and wildlife in the Columbia River Basin.