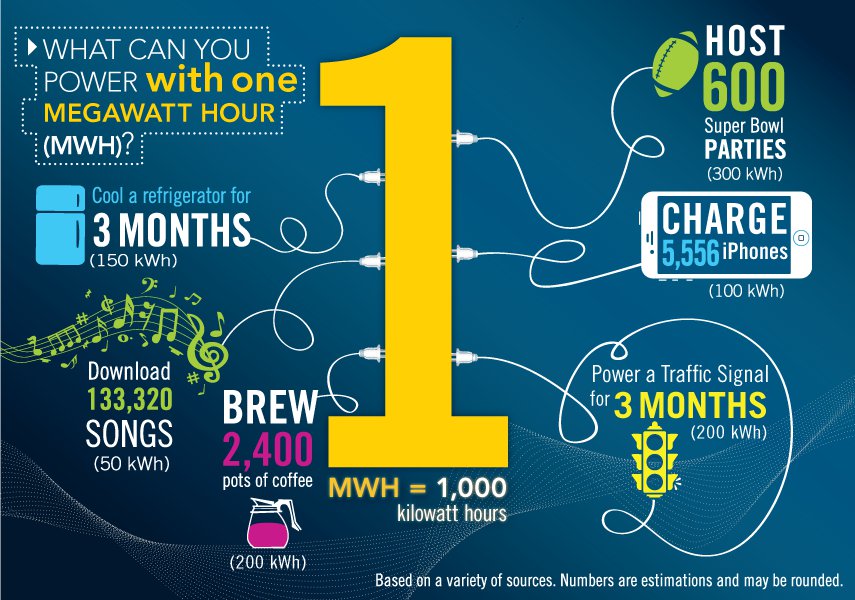 When I used to go to the store to get a 60-watt light bulb, it was a pretty simple experience. I could purchase any bulb that had “60 W” on the label and knew what I was getting and how bright it would be. Now when I go to the store and get a similar LED bulb, the label informs me that the 8 to 12-watt bulb has the same brightness as a 60-watt incandescent bulb. If both light bulbs produce the same amount of light, why do they use a different number of watts?

You may be familiar with the power required to run other appliances like a washing machine (500 watts) or a water heater (5,000 watts). If you run that washing machine for an hour, it requires 500 watt-hours of energy. The energy requirements of all such appliances make up the usage in a household. In 2014, an average household in the Pacific Northwest used about 11 million watt-hours, or 11 megawatt-hours of energy over the year.

How does this translate into the need for new power plants and energy efficiency?

In the next 20 years, the Seventh Power Plan forecasts that regional demand might grow as much as 38.5 million megawatt-hours. One way to help meet that need might be to plan to build a few more power plants. However, an essential part of the Council’s
energy strategy is finding better ways to use the power we already produce, like changing that 60-watt incandescent to an LED lightbulb.

Join the conversation on LinkedIn.