In the war against two species of invasive, freshwater mussels, which can reproduce rapidly and clog water systems and underwater equipment with blankets of hard, calciferous shells, Montana is on the front line.

Montana’s war on mussels has been aggressive in part because it is the only Northwest state where mussels, or more precisely their larvae, have been detected so far, said Kate Wilson of the Montana Department of Natural Resources and Conservation and the Upper Columbia Conservation Commission. She spoke at the Council’s July meeting in Missoula. The Council’s Columbia River Basin Fish and Wildlife Program encourages a regional approach to establishing a defensive perimeter to keep invasive mussels out of Columbia River Basin waters. The mussel larvae discovered in Montana were in the Missouri River Basin, not the Columbia.

Lakes, rivers, and reservoirs in many parts of the United States, particularly the Midwest and Southwest, are infested with zebra and quagga mussels. The mussels and their larvae, which can live out of water for up to 30 days, adhere to watercraft and submerged structures. On watercraft, they can easily be transferred by trailer or vehicle from an infested lake or river.

Until October of 2016, the regional war on mussels was a matter of concern but not emergency. But then larvae from quagga and zebra mussels were confirmed in water samples from the Tiber Reservoir, located on a Missouri River tributary in eastern Montana, which is now considered to be ‘positive’ for invasive mussels. Ongoing sampling found more “suspect” samples in Montana water bodies east of the Continental Divide including the Canyon Ferry Reservoir, Missouri River, and Milk River. It is important to note that no adult mussels have been detected to date in either reservoir.

Since then Montana Fish, Wildlife and Parks, which leads the Aquatic Invasive Species Program in Montana, has stepped up its inspections of watercraft and monitoring for invasive species in lakes and rivers, from fewer than 100 water bodies to more than 240 annually. The state also vastly increased the number of inspection stations. “Since the initial detections in Tiber and Canyon Ferry Reservoirs in 2016, the state of Montana’s Aquatic Invasive Species Program has really stepped up efforts to protect the waters of the West from harmful invaders,” Wilson said.

State and partner station inspectors check watercraft near border crossings entering the state, crossing the Continental Divide, and as they leave Tiber and Canyon Ferry Reservoirs. Wilson said Montana inspected more than 86,000 boats in 2017, up from 37,530 the previous year. “Montana sees traffic from the East, the Midwest, even Mexico,” she said. The inspections have been effective at catching and cleaning infected watercraft. In 2017, mussels were found on 17 vessels, up from seven in 2016, and 80 citations and 300 warnings were given to watercraft owners, she reported. 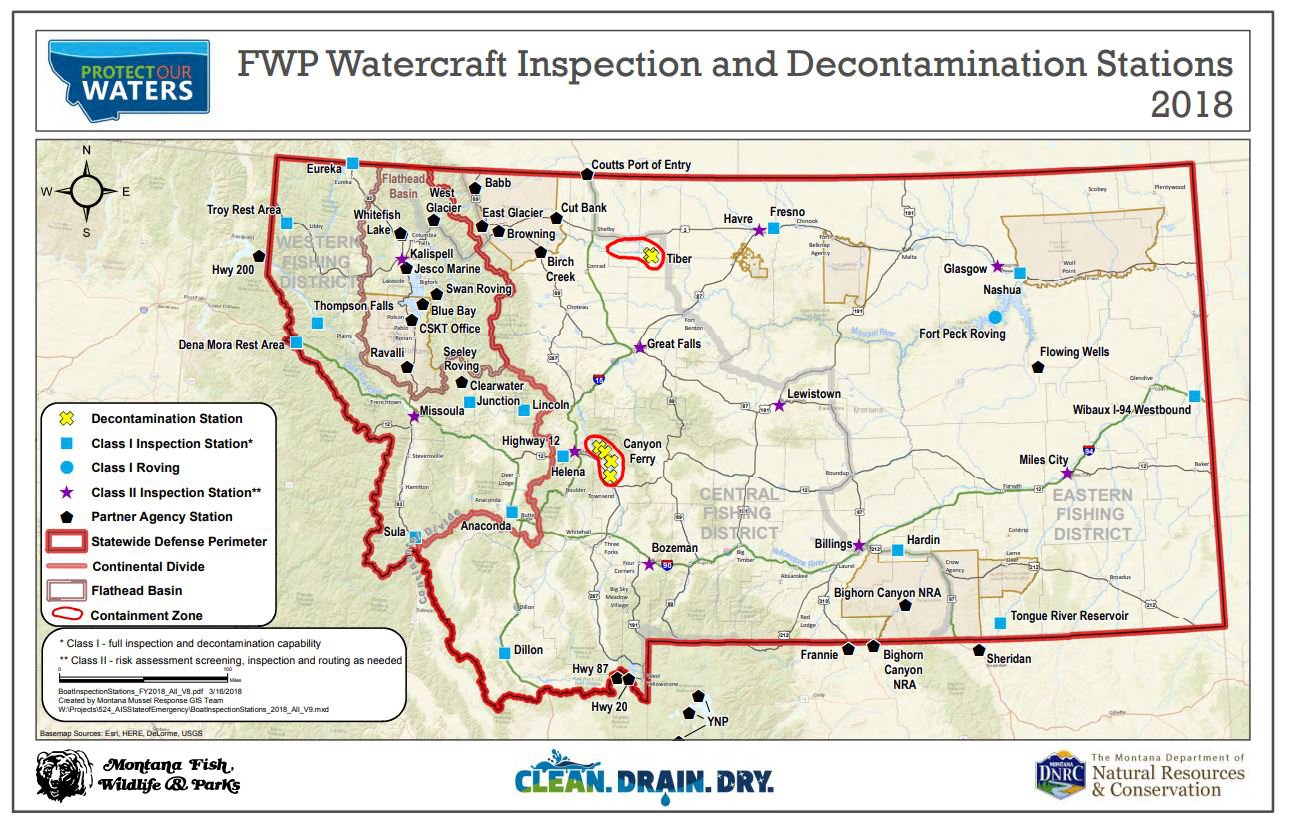 Ongoing funding for the inspection stations, which have been established in each of the Northwest states, is a concern in some places. The federal government has provided funding, which is available if it is matched 50 percent with state money. The cost-share program, coordinated through the Pacific States Marine Fisheries Commission, has allowed the four Northwest states to increase monitoring efforts as well as the number of watercraft inspection stations, including the days and hours of operation.

Each state funds the inspections differently. Some, like Idaho, Oregon, and Nevada, charge watercraft fees; Montana currently funds its annual $6.3 million program, which includes inspection, monitoring, response preparedness, and public education components, from a mix of hydroelectric and angler fees and, in 2018, with $1.9 million from the federal government cost-share. Wilson said the state Environmental Quality Council, an interim legislative committee, is now looking at new sources of funding for the future. Potential sources the council is proposing include anglers, motorized and non-motorized watercraft fees, general fund revenues and rerouting a portion of the watercraft gas tax that is currently collected. The environmental quality council is currently overseeing the drafting of a bill with these new funding sources for consideration at the next Montana Legislative session.

It has been estimated that the combined economic impact of a Northwest-wide infestation (including British Columbia) could be nearly $600 million per year. The impact could be especially troubling in the Columbia River and its major tributaries, as mussel colonies can clog water intakes and delivery pipes, infest hydropower infrastructure, adhere to boats and pilings, foul recreational beaches, compete with native mussels, and disrupt food webs and the biological functioning of aquatic habitats. They pose a significant threat to salmon and steelhead restoration efforts in the West.

Detection of the larval mussels in Montana increased the level of investment in early detection and rapid response across the Columbia River Basin. It also enhanced communication among entities that manage waterbodies throughout the western United States. “The regional partnerships, coordination and alliances that have been built in the Northwest over the past 10 years on aquatic invasive species prevention have been impressive,” Wilson said. “States and provinces are really united on this important issue.”