Conservation and energy efficiency are different concepts — electricity use might be reduced during times of extreme demand for power, such as during extremely hot or cold weather. This concept, also called “demand response,” has an important place in maintaining reliable electricity service during emergencies. It is notable for its short-term duration. Energy efficiency is a different concept, implying a long-term reduction in electricity consumption with no corresponding decrease in the amount of work accomplished. A Northwest energy expert once described the impact of energy efficiency on electricity ratepayers this way: “Warm house, cold beer, pay less.”

In the 1960s, when it became apparent that demand for power was growing and new supplies would be needed, many of the region’s electric utilities joined the federal Bonneville Power Administration in developing the Hydro-Thermal Power Program to build nuclear and coal-fired power plants to augment the hydropower supply. But the effort proved to be overkill, as forecasts of future power demand were inaccurate — demand actually declined in the late 1970s and into the early 1980s. As well, the augmentation effort was poorly managed and plagued by cost overruns. Two studies in 1976, one prepared for Seattle City Light and the other for Bonneville, demonstrated the value of energy conservation, which could be acquired at a lower price than new generating plants. Energy conservation also had an obvious advantage: no fuel costs. This was an important consideration in light of the fact that the Arab oil embargo of 1973 was still fresh in the public mind. The Three Mile Island nuclear plant accident in 1979 increased public interest in energy efficiency and disinterest in nuclear power.

The Northwest Power Act of 1980 made energy efficiency a resource on a par with generating plants for the purpose of meeting Bonneville’s future demand for power. The Act requires Bonneville to acquire energy efficiency in addition to new power supplies its customers may require. Congress intended that Bonneville would constantly reduce its demand for power by increasing the efficiency of its customers’ energy use, thus keeping energy costs as low as possible.

While the region currently is on track to meet Seventh Plan goals, there are some areas to watch including forecasts of declining savings from efficiency programs and whether the region will identify new savings opportunities to replace those of residential lighting. Utilities’ achievements in energy efficiency have been declining since 2016. Forecasts from utilities show that this trend is likely to continue, despite relatively stable funding levels.

Meanwhile, in 2018, as in recent years, residential lighting provided significant, and increasing, savings, totaling 39 average megawatts. Despite success in lighting, the Council expects lighting savings will decline beginning in 2020 because as ever more efficient lamps enter the market, the base against which savings are measured becomes more efficient, as well, and that leaves less room for measurable improvements. Beyond lighting, significant efficiency potential remains in the residential sector. Shifting the emphasis toward heating, ventilation, and air conditioning, and water heating, will help meet the long-term efficiency potential.

Energy efficiency continues to contribute significant capacity savings – the ability to reduce peak loads. Energy efficiency has provided almost 6,900 average megawatts of energy savings since 1978. That is equivalent to the annual energy consumption of around 5.5 million Northwest homes. By building that much energy efficiency rather than building new power plants that burn fossil fuels, the region has avoided annual emissions totaling more than 21.9 million metric tons of carbon dioxide. Because most efficiency improvements are so inexpensive (less than 2 cents per kilowatt-hour), consumers have benefited because they have paid less for power than they would have if they were paying for new generating plants.

The Council tracks energy efficiency acquisitions by Northwest utilities and Bonneville on its website. 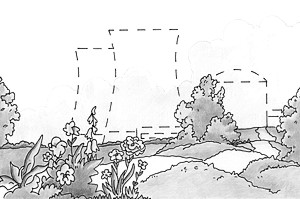 Illustration depicting how conservation can substitute for more power facilities.